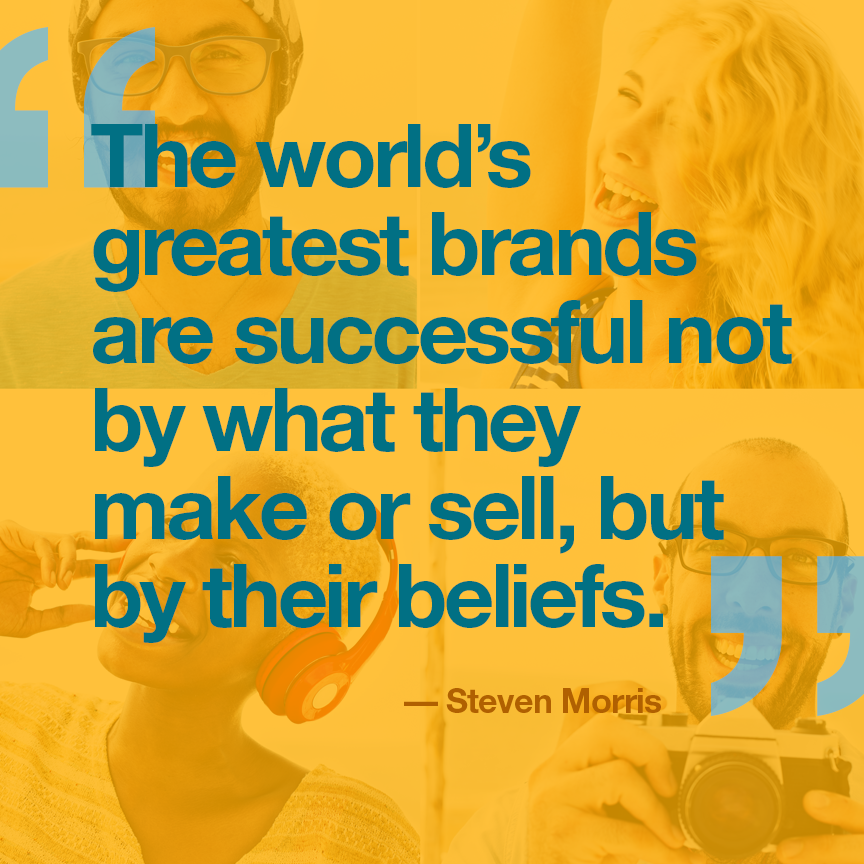 The World's Best Brands are Driven By Beliefs.

It’s that time of year when the Nobel Prizes are announced. The prizes are given in several categories that create the “greatest benefit to mankind.” As I dive into learning about this year’s winners, one truism stands out: all Nobel Laureates are risk-takers and adventurers. These people are honored and stand apart because they believed in or theorized something extraordinary that benefits mankind.
“Nothing ventured, nothing gained” is as true in business as in science, literature, economics and peace. If you and your brand want to create and capture more value, more attention and more customers, you need to to into uncharted territory and take more risks.

Believers and theorists are the world’s risk takers, not only because they base their actions on a solid archetype of risk-taking, but because they understand the nature of risk. Peter Drucker believed that “All human institutions since the dawn of prehistory or earlier had always been designed to prevent change…family, government, church, army. Change has always been a catastrophic threat to human security. But in the business enterprise we have an institution that is designed to create change. It means that every business, to survive, must strive to innovate.” 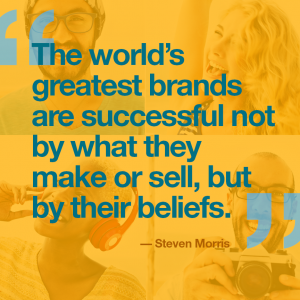 Drucker goes further and explains that, “All profits are derived from risk.” And, he makes the case that only through profit can a company cover its potential losses through while innoviating. This is why the most ground-breaking brands are usually the most profitable—they profit from taking risks. And, more profit permits more risk-taking. Ultimately, your brand’s beliefs predict its future path, including, but not limited to its likelihood for exceptional financial profit.
The world’s greatest brands are successful not by what they make or sell, but by their beliefs. These companies are unique because their beliefs are unique. They create extraordinary experiences because they have an extraordinary mindset. They stand alone because they stand on what they alone believe.

We can’t see your way to success.

As Joseph Campbell pointed out “if you can see the path ahead of you, clearly laid out, you’re on someone else’s path.” This is true for innovative people and for brands alike. The world’s adventurers, theorists and believers are also the world’s risk-takers.
In the aftermath of multiple hurricanes several Caribbean Islands, as well as US towns and cities have been torn apart. I’m seeing emails arrive daily in my inbox asking for donations—a usual response to such devastation.

This week, Elon Musk said he could rebuild Puerto Rico’s devastated electrical grid by applying Tesla’s existing solar energy or battery storage technology. In an October 5 tweet, Musk took the risk in saying, “The Tesla team has done this for many smaller islands around the world, but there is no scalability limit, so it can be done for Puerto Rico too.”
Ricardo Rossello, Governor of Puerto Rico, quickly responded: “Let’s talk.”
Elon Musk is thinking different, doing different and taking risks.
The most adventurous people and brand don’t just talk, they do. They inspire, challenge and move us. They get in our face and invite new conversations. They’re unafraid to ask audacious questions, and along the way, they change the way we all think.
“I’ll believe it when I see it,” is the skeptics mantra. More accurate this mindset is framed as, “I’ll see it when I believe it.” Skeptics don’t imagine or think like Elon Musk does. We humans only change our practices and behaviors once we’ve first changed our mindset.

Ask yourself these questions…

Are we standing on what we sell OR on our beliefs?
In complex times simplicity is needed more than ever. People will follow what they understand and believe—true for customers and employees. By communicating what you stand for, you demonstrate something to believe in, trust in and admire you for—especially when your behaviors are aligned with your beliefs. When you do this customers and employees will reward you with loyalty.
Are we creating ads OR stories to share?
Your brand doesn’t have to be as high-profile as Elon Musk or Tesla to create brand stories in action. You just need to be committed to something bigger than sales. Your brand should be looking for opportunities to insert itself into public conversations. Show your value by having valuable conversations with the world.
Are we telling people what to think OR giving them something to think about?
Knowing what you believe creates the courage to take a stand for something. Don’t be afraid to take a stand and don’t try please everybody.
People don’t get confused into buying your product but they won’t do so until you engage their emotions. People want connections. People want innovation. People want to be inspired. They don’t want brands that talk at them, they want something to talk about and think about and feel. If you want to start a movement, you need to begin with meaningful conversations.
What problems are we solving in the world, AND are they the right ones?
Even the smallest companies should offer some clear benefit to people and solve problems. That’s why you’re in business. So, asking and answering, “what’s wrong, and how could we fix it?” is one of the most potent questions for any business. Whether you sell clothing, cars, solar panels or software, you can and should have a message that matters.

So, what does your brand believe? Have you captured it, harnessed it and put power behind it?

If not, we’re here to help. At Mth Degree we mine, capture and apply the most potent deeply held beliefs of your organization and put them to work for your brand, and most importantly, your customers. Life is short, and all business exists to make the world a better place.

“To believe in something, and not to live it, is dishonest.” —Mahatma Gandhi