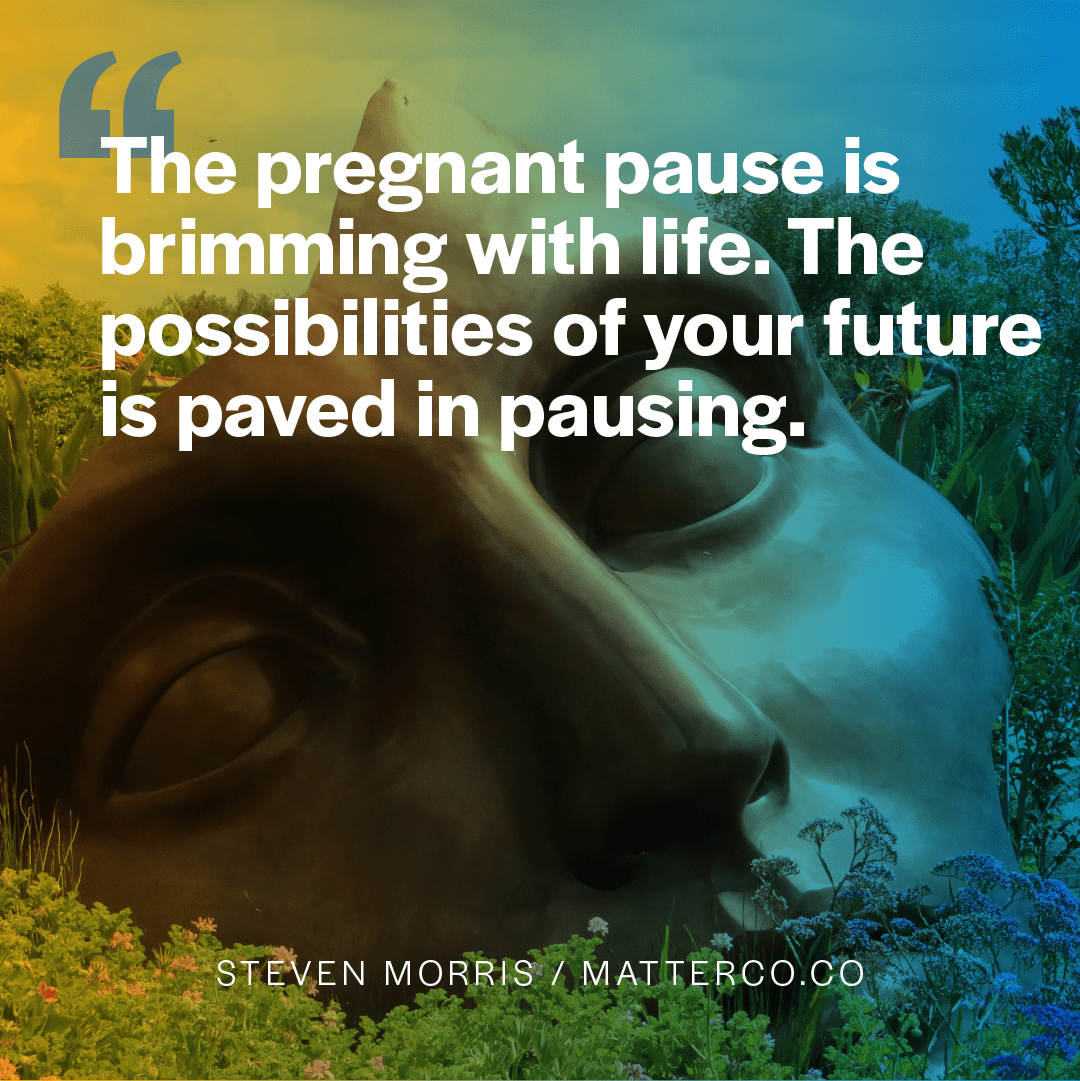 I had the honor to spend a year working with poet-philosopher David Whyte and his faculty through a conversational leadership program called Invitas. I’ve also traveled throughout Tuscany with his beauty-fueled caravan of seekers.

Over the years, I’ve experienced David speak many times. David is a master speaker. He’s very comfortable on stage in wide-ranging events like his now-famous TED talk, gatherings at Kripalu and Asilomar, and in various corporate settings.

At certain potent points when David is speaking, he will pause in uncomfortable silence. It’s not just a brief pause that’s designed for effect, but rather an extended pause that can last for a few moments or even as long as a minute or two.

Now imagine a room of 500 or so eagerly listening to souls. The full-house is hanging on David’s every poem and story. Then, in the midst of the talk, he pauses for an uncomfortably long time. Not uncomfortable for the speaker, but for the audience.

It took me a while to get used to this and begin to understand it.  Here’s what I finally realized—when David does this, he’s searching through the silence for the next just-right thing to say and share. He’s both seeking and allowing in this space. As he does this, he’s leaning into the energy of the audience to direct or inform him of where to go next with his talk.

He’s in silent conversation with the audience. It’s a magical creation that’s seemingly uncomfortable, but brimming with the courage to be silent and to allow for possibility.  Of course, he’s not the only one who does this.

Beyonce, I’ve heard, does this, too. While onstage during a song, or after, she’ll offer up a moment of quiet amidst the noise of a vibrant show. Others do it, too.

Issac Stern, the famed violinist, was known for saying “music happens in the space between the notes.”

This gets me thinking, when do we pause in our life?

For organizational leaders and entrepreneurs:

As we ready ourselves for a coming weekend, or holiday, or our daily ritual of living, are we approaching it with reverence?

Are we giving ourselves time to reflect?
To rejuvenate?
To reconsider?
To recreate?
To be silent with our own thoughts so that we hear our wise inner voice more clearly?

The pregnant pause is brimming with life. When we’re not bounded by the restraints of doing, we turn our attention to a state of being, in order to know what’s right to do next. Possibility abounds in pausing. Which can be both frightening and empowering.

It takes more courage to pause these days. We owe it to ourselves to listen carefully, closely, and intently, so that what’s next can come through.

“Silence is like a cradle holding our endeavors and our will; a silent spaciousness sustains us in our work and at the same time connects us to larger worlds that, in the busyness of our daily struggle to achieve, we have not yet investigated. Silence is the soul’s break for freedom.”
— David Whyte