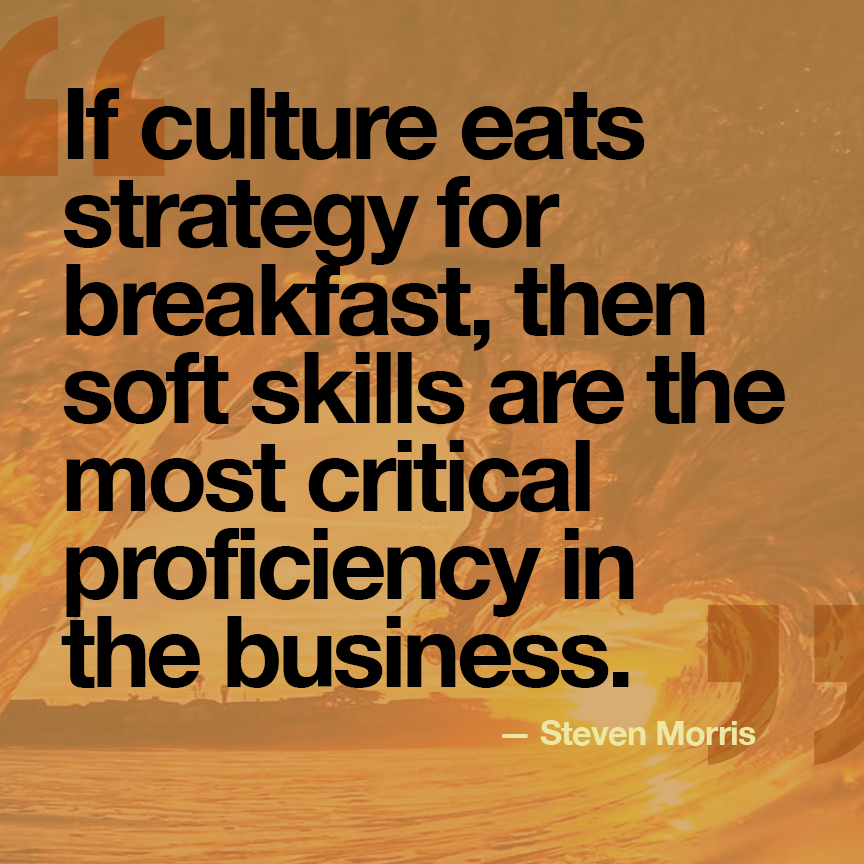 Building on the analogy of the impact zone (the part of the surf line-up where the waves are most likely to break) from my last blog post, one of the biggest misconceptions about water is that it’s soft. Sure, it can be when we’re drinking it, taking a bath or lounging in the pool, but anyone who’s seen the Grand Canyon knows that water is anything but a soft force of nature. The dangerous thing that happens within the surf impact zone is that a wave pushed from hundreds or thousands of miles away, meets a shallow reef which dumps a few tons of moving water on to stationary water. This conversion creates a massive impact that should be avoided at all costs, especially when the surf is big.
One of the most significant impact zones in the business world is the culture. It’s where the “soft skills,” water-like in their nature; powerful, malleable, formable, relentless, and with dangerously strong forces behind them, come to meet the hard stuff: real people.
If culture eats strategy for breakfast, then soft skills are the most critical proficiency in the business. Most modern companies are valued as much for the quality of their relationships, internally and externally, as they are for the hard-measured assets. Organizations that understand that culture drives results know first-hand how important it is to have strong soft skills.
What are the “soft skills” we need at work? According to LinkedIn’s data, which covers 2,000+ business leaders in 100 major cities, they identified these four critical people-focused skill gaps:

When we think about employee engagement, which hovers nationally at a mere 30% (meaning 70% are not engaged), according to Gallup, what are we losing and what’s the cost of these losses?

Here’s an example. Poor communication accounts for an average loss of $62.4 million per year at companies with 100,000 employees and $420,000 per year at companies with fewer than 100 employees, according to The Cost of Poor Communications, a survey by David Gross and as cited by Society for Human Resource Management. The hard skills—the ones that show up on resumes—get people hired, but it’s the soft skills that create losses and gains, but bad soft skills get people fired. It’s also where you lose customers from poor customer service. Businesses that understand how strong cultures generate great results are strong because they recognize the critical nature of nurturing soft skills.
This human engagement impact zone links employees’ overall engagement and motivation to a company’s ability to perform, innovate, adapt, and ultimately flourish. A strong ability to maneuver through the human engagement zone is a sharp indicator of company health. This would indicate if it is well suited to perform in our fast and ever-changing world and if its employees are crafting outcomes that recognize and capitalize on opportunities. By strengthening soft skills, companies shore up the hard measures, such as bottom-line.
Courage when and where it counts.
Winston Churchill is noted for pointing out that courage is the first of all virtues because it is the only one that forges all others. When applied to relational situations, both inside and outside the workplace, courage pays dividends. Courage can be defined as an intentional act performed after careful consideration involving significant risk to the performer, primarily instigated to bring about a well-intentioned outcome. Simply said, courage is a mindful and vulnerable act in the face of some fear. Courage is required in setting a bold pathway for you and your organization for innovation, to engage in a vulnerable conversation, and to be decisive in the face of uncertainty. Risk is where profit comes from, and courage is required to take risks.

This definition of courage emphasizes taking action after deep consideration rather than impulsively rushing in. This view of courage emphasizes consciously choosing paths and behaviors that take some personal risk because of core values (deeply held beliefs) coupled with the desire to bring about a positive outcome, rather than automatic, impulsive actions that may not be consciously chosen.
When leaders, for instance, find ourselves intentionally and mindfully entering the impact zone of relational work, we can healthily recognize our own emotions and create an environment in which others can also be authentic and take appropriate risks. In her book Daring Greatly, Brené Brown says, “there simply is no courage without the presence of vulnerability.” The impact zone of human nature is the most courageous and vulnerable place in business.
With all this danger, courage and impact zone in mind, I ask these questions: